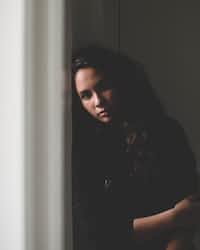 animevampire05 We're all mad here.
Autoplay OFF   •   a month ago
Transcript
This actually happened to me, and I hope it never occurs again.
eventreallow blood-sugar

Just an ordinary day at home. Chilling on the couch with my mom, siblings off doing who knows what. The sunlight was shining through the curtains, and three out of the eight cat's we snoozing on the opposite couch. My mom decided it was time for her to take a smoke break. So she stood up and headed down the hallway.

Naturally, since it was break time, I got up as well. While standing up, a part of my head kind of felt fuzzy. I didn't pay attention to it though, just a small tingling. Walking at my normal pace (which might be considered fast to others),I to headed down the hallway also.

I got about three-fourths of the way down the hallway, when I started feeling really really dizzy. All in a matter of seconds, my legs gave out from underneath me, and my vision faded away. My body went numb, and everything was black, but I could still hear.

I heard a peculiar thumping noise, and then I heard the pounding of feet. My mom called my name worriedly, but I couldn't move my body. For a split second, a bolt of fear shot through me! Why couldn't I move my limbs, or open my eyes?!

Then, a cold sense of feeling rushed through me, almost as though being submerged in cold water. I found that I could move again.

As I opened my eyes, I saw the the ground was at eye level with me, and that I was one the ground. I was confused when I saw my mom kneeled over me, hand on my shoulder. There was a look of intense worry on her face, along with panic.

I sat up, slowly, because my head hurt still. Now in sitting position, the blood flow to my brain seemed to be working again. I opened my mouth to talk, but my jaw hurt. I had a hand to the side of my head, and my mom was asking me what happened.

I told her I didn't know, that I must've passed out. The feeling of fear at not being able to control my own body was still there, vivid and horrific. My mom helped me stand up, and my tailbone felt stiff and painful. A million things were running through my head, but it was all so quiet.

The rush of thoughts were muted somehow, as if my shock and confusion toned them down. My mom sat me back down the couch, and grabbed me some water to drink.

That was the day that I found out I had low blood sugar. Now, whenever I stand up, a huge wave of dizziness washes over me, and I have to stand there and lean against something for a second or two. There's no way to fix it really, other than eat more sugar. But my mom won't let me, though I don't really eat much in the first place.

I try and eat as many vitamins as I can, but it never seems to go away. I've only passed out twice thank god, once at school, and the one I told just now. No need to be concerned, I've learned to deal with it, and sometimes even prevent it from happening.

I'm fine, and actually in perfect health. Just wanted to tell this story, that I'll carry with me forever. No pressure, no diamonds. -AnimeVampire05