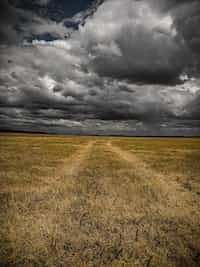 angelpuns I'm a bit new here,!! He/Him
Autoplay OFF   •   2 months ago
Transcript
Leslie's love for his daughter knows no limits, even at the expense of the rest of the desert.
thriller spookyskinwalkercreature featurecreepyshort storyshortstorysouthwestern.southern gothic

As Leslie pulled into the dirt driveway of his family ranch, he immediately knew something was off. It was too quiet.

The growl of the truck engine was loud, but never louder than the din of coyote song and hum of cicadas this late in the evening. The sun wasn't even down yet, it shouldn't be this quiet.

The old pickup kicked up red dust as he got closer and closer to the old ranch house.

He took his time parking and getting out, observing the silence without the sound of the engine in the background. Not a peep from either the land around them or the house.

The stairs squeaked as he stepped up onto the porch, Leslie frowning faintly at the sight of the main door open. He told her to lock the door.

The screen groaned as he pulled on it, the handle still warm with someone's touch.Whether it was his daughter's or not, he didn't know.

He stepped further into the dim house, the lights off as always. They couldn't get electricity out here even if they wanted to, and he was sure his daughter wouldn't wanna.

He didn't really wanna deal with another tantrum from her over the subject anyhow.

Leslie continued through the house, boots scuffing against old wood and leaving little prints of red dust that would be a pain to clean up later.

" sweetpea? You here?" He called, stopping for a moment to listen for anything upstairs. Nothing. He headed there first, knocking gently on his daughter's bedroom door. Not a peep.

Usually she'd be curled up in bed studying right about now, or sitting finishing up that day's homework. Instead her room was empty. The window open just slightly. Just the way she liked it.

He sighed and shut the door, calling for her again. Softer, this time. His throat squeezed a little tighter each time he called and she didn't answer.

A nausea grew in his stomach, uneasy in the quiet of the house. He glanced towards the back of the house, the kitchen just as quiet as every other corner of the house.

The back door was open as well, Leslie's nausea building at the sight. He slowly made his way towards the kitchen, only stopping at the familiar smell that hung on the air.

When he looked to his feet, he understood. The coppery tint of blood. It streaked across the old wood, like something had been dragged through the house. Out the backdoor.

And he knew, even without glancing out the kitchen window, to the barn behind the house. He stopped a moment, taking a deep breath.

Swallowing back vomit and every other thing that might have come out if he let himself panic.

He kept calm as he made his way to the hutch, in the hallway, that held an old pistol.

He only fumbled a little with the bullets, the shells clinking as a few slipped through his unsteady fingers and onto the floor. He had to keep calm. She was okay.

She wasn't stupid enough to let herslef get hurt. Bracing himself, Leslie made his way out through the kitchen and out the back door. The drag marks continued down the porch.

Through the overgrown yard. There were a few puddles here and there, spotting the yard in deep reds.

The blood in the house had been somewhat dry, but out here - even without touching - Leslie could see that it was still wet. Still warm.

He slowly made his way across the yard, checking and double checking that the pistol was loaded. Keeping quiet.

The deafening silence of the desert beyond their fence made his stomach roll, the stench of blood carrying from the barn doing nothing to help.

The barn was in better shape than the house. The doors had been replaced, and there were patches on the roof that he'd fixed this spring.

As Leslie got closer, he was glad to see that the padlock on the outside hadn't been broken. The key he swore he slipped into his pocket each morning still hanging out of the lock.

The stench of blood was overwhelming now. The silence deafening until he reached the open door of the barn.

He stood quiet in the doorway, swallowing back another wave of nausea. The barn floor was bathed in blood. So much that he wasn't sure he could remember what color the wood was underneath.

His gaze shifted to the center of the room, where - among scattered pieces of straw and old, rotting lengths of rope - was his girl.

She was a strange one to begin with, but her appearance now was nothing short of horrifying. Arms bending in all the wrong places and twice as long as they should be.

Her skin clung to her bones like a thin sheet, the outline of her skeleton visible beneath near gray, almost rotting chunks of the same skin.

Her appearance was corpse-like at best, even with the pink, tulip-sleeved shirt and jeans she still wore - ripped as they had become amid her change.

Her legs folded beneath her at an unnatural angle, feet curled strangely at the toes. Pointed and longer than usual, too close to hooves to be called feet.

Her hair was pulled back from her face with a hair-tie, but he wished it wasn't.

Her eyes had sunken in so far that the shape of them was far rounder than normal, the way they protruded from her skull almost fish-like in nature.

The caramel warmth he always associated with warm sunset seemed more of a sickly green under the thick film that had grown over them.

She didn't look up when he entered the barn, her mouth occupied with gnawing the flesh off of a bone - a bone still attached to one of their neighbor's arms.

Leslie could taste the coppery tang of blood, even after licking his lips to be sure it wasn't his own.

The smell hung on the air in such a way that he was fighting back a cough, choking on the thickness of it.

The silence from outside didn't permeate here, the slick sounds of his daughter cleaning that corpse with teeth too big and too sharp for a girl her age.

The only other sound in the barn was the low hum of satisfaction with each desecrating slurp.

Leslie dared a glance at the body she held so intimately, cradled on her knees like some sort of precious stuffed toy . He regretted it immediately.

Emaciated as he was now, Leslie recognized the always stately suit and overtly round figure of their rich neighbor to the south, Mr. Hastead. His left arm was all that remained of his limbs.

The bones of the ones she'd already taken lay somewhere among the straw, knobby white protrusions among the red and yellow floor.

The pale green of what Leslie assumed was his esophagus hung out of the place on his neck where his head had once been.

Leslie didn't see the skull, but he was sure he'd find it later, hidden somewhere in the barn.

There was a resounding crunch as his daughter finally pulled that arm off too, and Leslie ahd to finally look away as she dove into the torso.

He slowly backed out of the barn, eyes closed, just listening to the gentle cracking of ribs and ripping of flesh.

The coppery taste on his tongue lingered even as he shut the barn door and holstered his pistol.

Leslie padlocked the doors shut and slipped the key into his jeans, hands stuck on his hips for a moment as the world came back to life around him.

The silence ended there. The cicadas resumed their song and the coyotes to the west of them began crying out again.

He headed into the house in grim quiet, knowing a restless night lay ahead of him.

Leslie shut the backdoor without locking it. He pulled out a half-empty bottle of aspirin and a glass of water and set them on the counter.

He pulled a spare piece of notebook paper from the junk drawer, as well as a pen, and left a note.

He put the aspirin bottle away and slipped the pen back into the junk drawer.

As he left the kitchen to put his pistol away, he took a piece of chalk from the front pocket of his button up and drew a single tally on a chalkboard he'd hung up a couple of winters ago.

The chalk went back in his pocket and Leslie tried not to think about the thirty tally marks that already decorated the board as he headed deeper into the house.