Commaful
To Be Truly Blessed 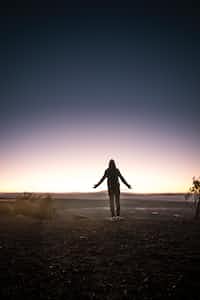 To Be Truly Blessed

There once was a girl born in a small town. She was the only child of her two parents who loved her more than anything. Her mother was a writer, a really good one too but unrecognized.

She would let her stay up late with a flashlight under the covers reading her all sorts of books and if the girl was lucky she would make up her own.

Her father was a starving artist who held a day job at the local factory. He always came home tired and covered in machine oil but his wrinkled smile could light up a stadium.

They never had much but they always had more than enough and the girl knew she was lucky.

When the girl was 12 both of her parents died tragically in a car crash. She didn't have any other family so she spent the rest of her youth as a ward of the state.

because they couldn't be.

She met a boy a couple years later. His name was Barry. He wore dark thick rimmed glasses.

One day when one of Barry's close friends made a passing remark at the girl Barry got his nose bloodied and the girl knew this was the boy she'd marry.

They were wed in a small closed ceremony and quickly moved into a quaint trailer home. There was a small garden in the front where the girl spent a lot of her time making her home beautiful.

Soon they had a little baby girl and then another. The first eldest was named Ruby. She was tough as nails. The second youngest was Attie.

She was the sweet one named after Atticus Finch from the girl's mother's favorite book.

Every day the girl would come home and see her husband smiling at her through his thick rimmed glasses smoking a pipe.

He always smelled like aftershave and the smoke from his pipe and the girl looked forward to that smell.

She'd kiss her husband on the forehead and hear her girls come running in screaming "Mama! Mama!" And she'd hold them in her arms and inhale their sweet hair because it smelled like her babies.

She'd hold them tight and every day she'd say,

"I missed you so much it felt like an eternity since I was away" and her girls would laugh and say you say that every day and she'd reply back that it was because it's true every day.

Some days the outside would thunder and shake the trailer home so much it felt like it was going to fly away.

were turning white and she knew they were both scared.

Her husband would hold her tight and she'd hold Ruby the same who would then hold Attie with all her might but really the mother's arms were holding them both.

She'd sing them a song every time, "Nothing is gonna harm you. Not while I'm around" then she'd wait until she heard 3 little snores and she'd know she was the luckiest girl alive.

At night they'd sing songs and read stories and their mama's head was an open book.

By the time they grew up they'd know everything she knew and more and they'd never want for anything they needed.

One day the girl kept getting sick so she went to the doctor and found out she was pregnant with a little boy.

She jokingly told her husband he would no longer be the only other boy in the house and he would reply that he never thought anything could make him happier than he already was.

He'd pick her up in his arms and twirl her around.

could never really say no to her. They named the baby Enoch, which means to forever walk with the Lord, nicknamed Nucky.

As I'm telling you this story you probably think everything sounds too perfect but it wasn't.

There were times when crying and screaming could be heard from the tiny house, there were many times in the girl's life when she prayed for death.

But all the while she knew how truly lucky she was. She knew she never really needed for anything besides what she already had and each night she went home to a warm bed filled with love.

And what more can anyone ever really ask for?