Commaful
Me and You 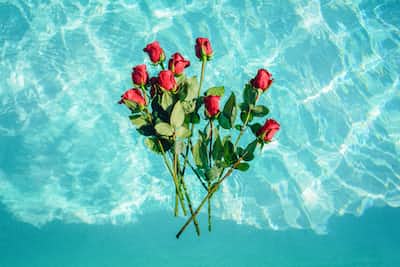 I pressed his knuckles to my lips, savoring the way they jutted and pressed into my mouth. I kissed each one separately or in twos. I took my time, loving the way it all felt.

He sat there, staring at me as I did it. Confused on what to do with himself, tense and waiting. I could hear him swallow loudly.

I moved from the knuckles on his fingers to higher up and one his hands. Kissing the back of his hand. I could slightly taste him with each kiss.

Flipping his hand over, I now kissed his palm and moved up to his wrist and forearm, kiss by kiss. When I reached the crook of his elbow, I stopped.

Bringing my face back up, I held his hand once again. Staring at it and playing with his fingers.

I continued to play with his hand as I looked up to his face. I waited for him to say something.

He swallowed thickly once again. Quietly, I said, “If you couldn't tell, I like your hands. A lot.”

I looked around to his neck and shoulders. Drinking in the sharp angles of his collarbone and jaw line. The way his shoulders jutted out, just like his knuckles and cheekbones.

“There's more I’d like to kiss, if you wouldn't mind.” My voice was even quieter this time.

He finally found his voice and asked, “And where is that you'd like to kiss?” His eyes glanced down to his shoulders then returning to me, realizing where I meant.

His words were barely a whisper. “Please?”

I looked back to his face and softly smiled. I leaned in and rested my head in the crook of his shoulders, letting my lips brush against his neck.

We sat there, barely moving. He took a deep breath. I felt his chest rise and fall, and could hear and feel his heartbeat from where my head lie.

I started to move again, fully kissing the spot I began and moving up, toward his jaw. Opened mouth, light and sloppy kisses, a combination of all.

Repeating down and back up his jaw to his ear. Down his neck to his shoulders. From his shoulders to his collarbone. Kissing whatever exposed skin there was.

His breathing was shallow as I praised him with my lips. My hair tickled his skin and face as I went along, little stray hairs that had fallen from my tied up hair.

I finally lifted my head to his face. His eyes were half closed and mouth slack. My mouth hovered just before his, so, so close to touching. He licked his lips at the close proximity.

I leaned in, closing the distance, but shifted to his cheek, right next to his mouth, at the last moment.

He hummed humorously at my sudden change in direction. I kissed all over his face, then. His cheeks and cheekbones. His nose and forehead and eyes. He relaxed more and more as I went.

And finally, I reached the destination he'd been really waiting for. I pressed my mouth to his, and at this point, he cupped the back of my neck and pulled me in closer.

I pushed him back and we fell back onto his bed from our sitting position.

We laughed laying there, my face in his chest and his face in my hair. We layed there for a while, breathing each other in. And soon I fell asleep in the comfort of his arms.