Commaful
Be a man! 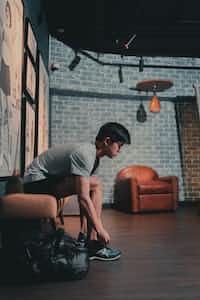 amantrove I love writing & spreading happiness.
Autoplay OFF   •   3 months ago
Transcript Use Images
When I was kid my father used to tell me "be a man!". As a kid I never understood that why my father said me those words when I cried or when I played with girls, but after this eye opening incident in my life I understood the true meaning of being a man.

When I was a kid my father used to tell me to be a man. Don't act like a girl.

I never argued with him that why he said such things to me because he is my dad and deserves to be in that position to tell me that.

I used to share these words with my friends that when I take a lot of time in the bathroom my father tells me that man should not take such a long time to get ready.

Those words were never of any importance to me or any of my friends.

But one day I saw a kid in my school, I don't know whether he was gay or not but in his walk you can see a bit of feminine behavior.

I spoke with a few of my friends that why he is like that and they said that he is gay, buddy.

I enquired more about him and came to know that everyone in his class laughs at him and tries to stay away from him.

any person is gay. I learned about the term effeminacy. It means having qualities or behaving like women.

There is a whole article on it about the possible biological reason for effeminacy but one thing was clear that there were chances that the boy was not gay.

Now listen to my words friends imagine that someone calls you a girl even though you are a boy how will you feel?

I cannot even imagine that how brave that kid was who despite all the difficulties came to school daily. His pain is unimaginable but his bravery is recognizable.

When I told my friends that we should speak with him and help him they all became ready but when we went to see him I heard his father saying to him,

" you have to stand strong for yourself son". These words were really of importance not only to him but to every one of us.

We all immediately by looking at someone judge them call them gay, faggot, or whatever title we are capable of giving them but we never think about their emotional situation.

My father used to tell me even today says to me, " be a man!

son" and I understand that he used to say it because he knows that we live in a society in which people treat other people like animals.

For the first time in my life, I understood the meaning of the sentence" be a man" is that we should have the guts to stand for ourselves.

I request all of you to spread happiness and love not hatred. Stand against every injustice. Stand in solidarity.