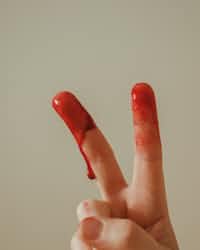 altoidog Community member
Autoplay OFF   •   a month ago
Transcript Use Images
♡A family so loving they kill each other! ♡ Sadly I had to cut out a bit due to the word limit :( But hopefully it is still decent!
fiction horrorfamilyfunnydogsbloodthrillthoughtsadventurescifisci-fi

I'm doing mighty fine. Kelvin, a teen n' thriving racketeer who always seemed a few years older than he was, could be seen swaggering about outside the 7-Eleven, digging his skinny hips into the patchy brick wall next to the door.

A hand dug deep into his Levi's jeans front pocket, and the other one wrapped its fingers around an ice-cold slurpee, lips sucking fresh on the straw. "I'm doing mighty fine," he spoke aloud this time, a little spot of the blue slushee pouting from the edge of his mouth.

Out of the corner of his eye, he saw a lady approaching the glass doors of the store. Her hair was done up nice n' fluffy, and, as Kelvin looked closer, a goodie pair of hips swung roundly right above her thighs. Indeed, she was one mighty fine.

He grinned with closed lips, bowing his head down and ruffling his shiny head of hair with his fingertips as he straightened up off the wall like no big deal.

The gal had not yet noticed Kelvin, for she had already slipped through the glass doors. But I'll fix that real quick, he thought, entering the store as well.

He tossed his half-empty slurpee into the trash can on his way in so he could put both hands into his pockets for the full effect. His legs apart, his back stooped to a swaggin' jaggin' low, he trotted through the store.

Kelvin could hear blondie in one of the back aisles, chatting away by the hotdog machines with some other unknown bloke. But taken? Nah ah, sir. She sounded not.

As he got closer and closer to rounding her aisle, Kelvin felt his confidence take a juicy leap. But then, just as he was about to make his move...

"Yeahh, Susan, I'm so bro into those kinds o' movies, too. Ya know, we could snag a couple tomorrow if ya like, gonna get high on em', too." It was Kelvin's little six year old brother, Pelvin.

And, (Kelvin gave a shudder), boy was he absolutely terrible at talking to girls. However, that didn’t matter right now. What was important at the moment was to give that little drippin’ perv a little lesson about life. Kelvin stepped into their view.

"So, Pelvin," The clear grumble made Susan swing around and the little boy let out a small muted squeal. Perfect. Kelvin paused in the aisle, staring Pelvin down for a good two seconds and a half, and then he slowly moved on in.

"I see," he said, sliding his fingers along the small back counter as he progressed, his voice dangerously on the rise, "That you've met today one mighty fine young lady. Now, what may I ask is this lovely gal's name?" Pelvin took in a little gasp, staring at his older brother.

"He-h-her n-name," The little brat was deliciously trembling, "Her name's S-su-sus-su-" "My name is Susan," spoke the girl. She was gazing down at the ground away from Kelvin's formidable eyes.

Pelvin glanced at her quickly and began to nod up and down, his eyes bulging and eager as if he was pleading but half relieved that he might be ok.

Not after this one, not a chance, Pelv. Today you're gonna learn. Kelvin stopped approaching, and a toothy, blackened smile slowly formed on his face. "Nice, Susan. Now Pelvin, why did you make this poor young lady answer your question for you?"

"Is it because you're not a gentleman?" Kelvin's voice had evolved into a deadly rant. Again he began to move forward, now at a much greater speed. "That's not an excuse!"

"B-b-but-" "I said that's not an excuse, Pelvin!" The older boy shouted directly in front of the cowering figure, hysterical pellets of spit flying into his face. Kelvin's hard fist raised and dove at Pelvin, but the small boy barely ducked it with another slouching cower. That little rag. Kelvin's mood was turning nothing but worse.

Anger boiled in his face and his eyes rattled like rabid turnips. In an instant, Kelvin whipped to face the counter to his left and heaved the entire hotdog machine from its place in one angry, whipping motion.

The hotdogs rattled around inside as he raised the heavy box of metal over his head, and, oblivious to the desperate wail from Susan, Kelvin did not hesitate to crash the hotdog machine down with a clang onto Pelvin's little six year old head.

A loud crunching, metallic sound seeped through the air like a torrent of blood, and Pelvin, who was now sprawled like a dog on the ground, let out a moan as Kelvin raised the box again.

Blood dripped from the cables of the box and left red stains on the ground, but Kelvin didn't care.

"Not an excuse!" Each word was accompanied by another crackdown of the box upon Pelvin's skull, the crunching noise turning moister and redder every time there was a whack.

At this point, Susan had positively fled from the scene in utter horror, screaming inaudible sounds over the smashing and squelching from the hotdog machine.

Blood dripped from the boy's contorted and smashed origami nose. His face was covered in barely forming scabs and more gooey, dark, warm blood. Noisewise? He was silent. He was perfect.

He wouldn't be talking to and ruining any more of Kelvin's opportunities any time soon.

"Only gentlemen talk to girls, you listen?

" Kelvin spat harshly onto Pelvin's messy face, and then gave him one last kick in the side before brushing off his hands with contempt and turning back through the aisle. He heard sirens.

And that little missy Susan must've called the cops.

As Kelvin continued walking to the 7-Eleven's exit, he could see the flashing lights whirling rapidly on top of a big white ambulance through the glass doors.

A navy blue copster was right on its tail. Now, Kelvin felt a wet trickle of sweat dribble down his back. But I'm cool, yeah, cool as ice.

He continued along, and while he went through the glass doors an armed policeman passed him walking on his right, looking sternly into the store.

Kelvin held his breath and walked on quickly through the doors, and, after only a mere glance from the policeman, the two parted ways.

What a relief! After this it was quite easy to walk along the wall and slip behind the mart, where he could get away in the flash of a gun.

He slunk soundly along, both hands still shoved through his pockets, and soon turned the corner of the store. He walked along a ways until he was out of sight of any potential trouble.

To safety. Oh, he had really really thought it was someplace safe.

A cold plethora of fingers landed suddenly on Kelvin's shoulders, making him freeze dead cold in his tracks. Even more fingers. They were ropey, strong.

And all of a sudden, Kelvin realized who it was.

Oh, god, I'm more than just dead in my tracks.

He knew. Now his heart spun into a bouncing bomb. But he had to try and stay cool.

Just as he pulled his lips into another closed smile, trying to scrape together an innocent dumbness, the fingers that rested on his shoulders suddenly jerked backwards,

and Kelvin was turned straight around.

Kelvin was just shy of scraping 5'8. Chelvin, on the other hand, surpassed him by five miles. She stood there, her beady black rat eyes chiseling creases like razor blades into her face.

Her thick hair was loosely knotted into two hairy braids, dumped behind her tank top in a dirty blonde scrawl. Fingers so ropey, so cold. They crawled up to Kelvin's neck.

A goodie pair of hips, Kelvin thought randomly, but the moment fled his mind as quick as it had come.

At this point, the hope of a cheesy smile had faded, and the dumb expression was shaved clean off his face.

Kelvin tried not to breathe as the fingers quivered again, they squeezed a little more. They never slackened.

Suddenly, Chelvin let out a snort.

"You know what? I ain't gotta play up to it anymore," She scoffed, throwing her head to the side like a wild boar. "I already know what happened.

" The fingers squeezed hard enough for one of the neck's tendons to pulse with pain. She looked him straight in the eye. "And I already know you know what I'm going to do."

Actually, I have no idea. But Kelvin's insides were genuinely rattling. Would it be a punch? A kick? Fire? He didn't know.

"Aaaarrrgghh!" Chelvin lurched backwards, making up her mind. Kelvin was suddenly dragged forward, stumbling over his feet as he felt his neck pull like taffy and pinch.

"Graaaaaaaahhhh!" The other hand. A pallet of whips tipped with shiny sharp knives.

But it was hurling at his face, and Kelvin got to see it for just a second before his face exploded with a pain he never thought his body could endure.

As Chelvin's paw of a hand retracted swiftly after the dive, Kelvin felt the skin of his cheeks and nose sear like a boiling steak,

and his mouth instantly flooded with the irony taste of blood. He instinctively swung his palm up to his face for protection, and he felt shreds. Fleshy wrinkled shreds of what had once been his-

"OOOUUGGHHPHH!" The paw ripped down again from above, flying right past Kelvin's hand and back into his face.

Now the nails dug into his forehead and raked left in the deep fleshy trench of a gash.

Oh my god my face she's ripping off my face

A clicking pucker as his head was jerked parallel to his shoulder, tendons not long enough to reach. It sagged. His pulsing eardrums throttled his brain.

Another tear up the chin and right through the white, bendy cartilage of Kelvin's nose.

She's ripping off my face

And now it lay strangled on the ground. Twisted neck. A trickle of warm, liquidy blood dribbled into the crack on the sidewalk.

Chelvin stood straight up, staining her shirt red as she wiped her wet fingers on the raggedy cloth.

"An eye for an eye," She grunted. Then, she turned around again. It was a nice blue, sunny day. Maybe she would go to the park today.