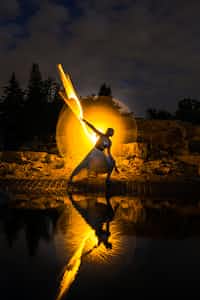 aliagraceshades Kinda Sorta getting obsessed with MHA..
Autoplay OFF   •   2 months ago
Transcript Use Images
Queen of ice-Ruler of Fire- Brings war upon the Elements
This is the prologue/intro, hope you enjoy it! 10 likes gets chapter 1!
fiction fantasythrilldawnweaponelven queen

The elven queen stands at the ready, scythe held in her hand, ready for attack. Before her a shadow undulates in the sun shimmering like like a broken mirror. "You will never win Galbor.

Says the queen, her long silver hair billowing behind her in the wind of the golden mountain morning. Then the sun goes behind a cloud and fear crosses her face.

She pales and then readies herself for a fight. The shadow begin to swirl within itself shapes and colors spinning behind its dark mask. It seemed to grow in the shade of a massive snow cloud.

She raises her hand to clutch at a amulet hanging around her neck. She yanks it off and holds it flat in the palm of her hand.

She says a few words and the amulet rises into the air glowing slightly. The shadow-Galbor- hisses and turns a darker color of coal black.

It races forward but before it can reach the stone, it disappears with a sharp CRACK.

The woman sighs in relief then raises her scythe again,The shadow flies at her, screaming obscenities in a language not known to elf kind.

The queen swipes and slashes at the air, missing the shadow by inches each time. Galbor dips and twirls through the air, dancing just out of reach of Queen Almatrix's weapon.

Then with an evil cackle he ducks under another swipe from the blade and flies straight into the woman's chest. She drops the scythe, and grapples at her bosom.

Then she drops to her knees and snow begins to fall around her.

She gets up on on knee, a new look coming across her face one of fearsome fury and as the powerful woman rises, she emits a glow almost radiating electricity.

Her formerly icy blue eyes now shine a red as hot as a glowing ember. She picks up her scythe, and then raises it up into the air, straight above her head.

And from the blade, comes a wave of power so strong that it flattens every tree withing a miles radius.

And with her powers recognized, she sets off into the dawn, not looking back at the destruction she leaves in her wake.

I hope you liked it! If this post reaches 10 likes I will publish chapter 1! I really wanna keep going with this so please hit that like!