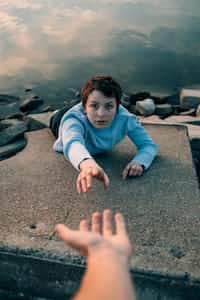 aliagraceshades @BERIGHTBACK PLZ ANSWER US
Autoplay OFF   •   3 months ago
Transcript Use Images
My name is Aspen Surrey, and I am 13 years old as of right now. I am originally from Hillton, VA. These are the true happenings of the events I took part in a couple of weeks ago. Charlin (you'll find out who she is later) is making all of us write down our experiences so far, and every day further, so you probably hear from me again. Don't be fooled by the present tense.
fiction help plz

Hey guys,! I was wondering if y'all could help me out a bit? I need a title for this, and If you guys could put something in the comments about what ou think it should be caled. I will put all the pther parts out soon. ater reading them drop a suggestionion in the comments. Thank you!

My name is Aspen Surrey, and I am 13 years old as of right now. I am originally from Hillton, VA. These are the true happenings of the events I took part in a couple of weeks ago.

Charlin (you'll find out who she is later) is making all of us write down our experiences so far, and every day further, so you probably hear from me again. Don't be fooled by the present tense.

These memories are so real, it's like going back in time. It makes your "terrible experience" of your cousin smashing cake in your face, look like a pleasant walk in the park.

NOT that I've had someone do that to me or anything. *Wicked side-eye at my brother.*

I wake up to the smell of waffles and eggs. I also catch the slightly subtler scent of the chicken in the air fryer.

I roll over and glare at my alarm clock, which, once again, failed to wake me up on time. Most ids would be mad at it for not waking them up, but I have to get up for waffles, and church.

I close my eyes to try and remember the dream I had been enjoying, though I can feel it slipping through my fingers quicker than water out of a strainer.

Im able to catch a glimpse of a couple of things before I fall out of bed. A vase of flowers, and a large number of people in my house's living room.

As I lay on the floor, I hear the laughter of my family a floor below me. I stare at a forgotten pair of flip-flops lying amidst dustbunnies and socks under my queen-sized bed.

I sigh and push myself off the floor. I sit back on my bed, and as I pull on the flip-flops I pulled from under the bed, I look around my room.

My bookshelves, crammed full of books about fantasy and science fiction, graphic novels, and realistic fiction. I have no preference really to what I read.

after staying up late drawing.

I don my watch and start to work on the snarls in my dark brown hair. After a couple of minutes, I give up and just twist it into a messy bun on top of my head.

Then, I throw open the door to my room, and as I walk briskly down the hall, throwing glances over the balcony, I can smell the luscious scent even better than I had in my room.

I could now smell the cinnamon and nutmeg my dad used in his waffles.

I raced down the stairs, accidentally knocking the cat off the balustrade, and heard him land on the armchair below with a muffled thump.

Even though I was in a hurry to get my share of the waffles, I ran to check on the cat.

He looked majorly put out, and like he was scarred for life and would never trust me again with his life, But other than that he was fine! I was actually checking the chair.

Mom gets annoyed when a creature under her care ruins a piece of furniture. That includes kids, animals, and Dad.

Especially Dad with his salsa, or his beer, when he jumps to cheer that our football team scored a touchdown.

After making sure the armchair is intact, I resume my pace and reach the kitchen within seconds. Despite my speed, I find my older sister has already grabbed my seat, my plate, and my waffle.

As I pass by her (my) chair, I push her head forward and grin at the disgusted noise she makes. After grabbing my (her) waffle I spin and laugh out loud at the mess she's in.

It seems that my shove, propelled her forward enough that she had to grab the table, flipping her plate into her face.

She flung her hands up at the last moment, so only her hair and her chin were syrup covered. Oh, and her clothes....and her nose.....and her shoes ("oh god not my shoes!")....

and every part of her body other than her eyes. She turns sharply in her seat and glares at me. She has intentions in her eyes, intentions that I dont want to be in the middle of.

I quickly scoot out the door into the living room and plop onto the window seat. As I settle myself into the array of pillows and cushions I glance out the window and instantly regretted it.

Right across the street, is my (old?) best friend's house.

We were told that his family had died in a tornado last year, and, despite our insistence on him coming to live with us, he was placed with a family who lived across the country.

Thus, the last I saw him was when he waved goodbye to me, carrying his bag, and a man carrying the rest of his belongings, then he got into a fancy, new-looking Audi.

I quickly turn away from the house, where a young couple and a moving crew are in the act of moving a sofa into the house, the couple directions,

the moving guys sweating in the heat of a sunny California morning. I reach under the bench, to the shelf the family keeps our current reads.

I grab, Rick Riordan's, Magnus Chase and The Gods of Asgard. I'm at the chapter where she meets Freya and I laugh at the title, "Freya is Pretty! She has Cats!".

I read on about Blitz and Magnus.

When I get to the part where Freya agrees to help, only if the promise gets a pair of earrings as well, I hear a rumble outside as our old family car starts up. .

I guess I was so immersed in the book, that I was oblivious to the mayhem of leaving for church. I look out the window and see my family looking at me through the windshield.

I kick into overdrive and throw on my favorite sundress, dab some hand sanitizer on my hands, breaking down the syrup.

I pop on some sunglasses, and dash through the house, looking for my slip-on. I finally locate them under the stairs.

I run out the door, and make sure to lock it after me.

When I finally scramble into the car and snap my belt into the outlet for the buckle, we are five minutes late, and we peel out of the driveway so fast that our elderly neighbor, Mr.

Flidrick, brandishes his fist at us as we pass his house.

When we get to church, we all let out a tiny groan, that we have to wait for the procession to finish before we go inside the church, therefore calling unwanted attention to us.

I dont wait though, as soon as I can, I dash inside and into the Servers Quarters. There sit my fellow altar servers. They greet me with grins and waves.

I head straight for the closet, where the female robes hang in total disarray. I rifle through them, leaving a bigger mess than before, and yank them on.

I plop down on a bench next to the locker where I store my belongings every Sunday.

I look sadly at the place next to me and remember how Carter used to sit there, laughing with me over the imitations of the pastor and priests as we wait for our cue.

Then I glare as an unfamiliar body fills the space. The short, boxy figure of Jo Martin takes the spot of memories. I have never much cared for Jo.

She's nice and all, but a little too upbeat for my taste, like she doesn't get that the world isn't rainbows, kittens, and glitter all the gosh dang day.

I turn and look at her from the corner of my eye, rather than full-on. Her pale face, against her pitch-black hair itself, would be disconcerting.

She has to go and slather on so much face junk, otherwise known as makeup, on her face, that she looks like neon, glow in the dark clown.

I turn almost 180 degrees on the bench now facing Kaleb Fulton. He's an average looking kid, and He's fun to hang out with, but not my first choice of friend. I hear the musical cue.

We all stand simultaneously, and we line up, me grabbing a candle, and moving to the flank of the person holding the cross. We all proceed and sit on the pews right in front of the altar.

I mostly zoned out during the mass, going through the motions. After though we all go back to the Sacristy, and there stands Father Linkoning.

He hands us each a five-dollar bill, then, we all say a prayer, and I head out, walking towards the corner drugstore, where you can get anything frozen for five dollars or less.

We walk in, and for a moment, I lag behind the others, because I'm standing under the AC unit.

The drugstore has a nice feeling to it, with its blue walls coral booths, and it's white tables and counters.

I walk up to the counter, and order a triple chocolate milkshake, then, go sit down with the rest of the crew.

As I slide into the booth, reveling in the coolness of the vinyl of the seats, I look out the window towards the comic book store across the street.

I see someone dart out of it, and then the owner rushing after him, shouting at him. We're all deciding whether to stay in and eat or to take it to go.

Everyone else says that they are going to stay, but I realize that I want to to-go instead so that I can get back home for family taco day.