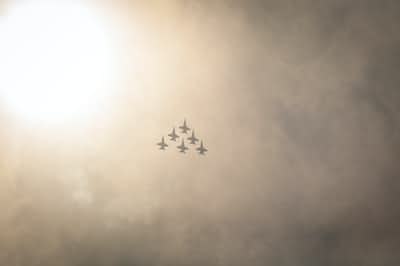 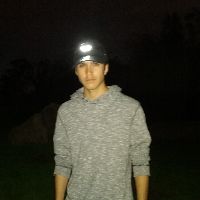 al_xander_ Some kid in California bleeding ink.
Autoplay OFF   •   3 years ago
Transcript
It's a civil war through one soldiers last experience.
fiction changeurbanpeoplewar

I picked up my rifle. I knew what I had to do: I needed to run into the hail of gunfire being spewed at us. But similtaniously, I needed to stay alive long enough to keep the enemy distracted.

Being in their capital, there wasn't much to hide behind other than a few blocks of rubble or a burning car. Then it ceased; something was wrong, that's when we heard the whistle of mortars.

"Get down!" Called out Lieutenant, just as explosions shook the Earth and fragments of concrete rained down on us.

There was a silence as the dust cleared, but it didn't last long; we could see the enemy running out from behind the tanks that they had just been using for cover.

"Get ready!" Yelled Lieutenant, raising his hand. "Fire! Fire! What are you waiting for god dammit, get your revenge, their blood is yours!" (So much for a hero's sacrifice.)

I took aim and shot the first silhouette I could make out. It crumpled to the ground and stayed there.

It wasn't hard to find another, and they were all dropping at a steady rate as my comrades laid waste to their attack.

The last body in brown uniform fell. The sounds of magazines being unloaded and guns being cocked replaced the explosions that had just filled the air.

"On my mark, begin advancing." Lieutenant stood atop the debris of what used to be an office building. "Kill any that are still alive or any that surrender; Queen wants no survivors."

A buzz occurred in everyone's earpieces, signalling us to begin moving forward. As I walked, I stepped over the remains of things that I would have considered people in the past.

I would have considered them fellow comrades, but they were loyal to a system of government which had caused the civil war to occur in the first place.

They deserved this - that's what I'd been told to understand at training, and to an extent, I believed it.

But no human (or living thing for that matter) deserved to have their body torn up by small pieces of metal.

No human that would contribute to the demise of their own species deserved to remain alive, however. And I was here to ensure that they didn't.

We reached the halfway point between our barriers and their tanks. "Steady now," Lieutenant said through the earpiece. "I want squad leaders to throw grenades over the tanks."

And sure enough, four explosions followed the command, along with the yelling of men from where the grenades had been thrown to.

Gunshots echoed as one squad (comprised of five men) began unloading their ammunition into those who had surrendered. This is what we were here for: to kill anyone who had threatened the Queen.

But I felt happy for them, because they were free now. They no longer had to worry about the war or seeing loved ones dying; they could rest, instead.

As everyone reached the tanks (four groups in total, which was twenty men), we prepared to attack whatever meager force remained on the other side.

We lined up. "One team at a time," the leader of Alpha Squad said, leading his team around the tank they were behind. "You heard him," my squad leader said through the radio.

We went next. First Davidson, Eric, John, me, and lastly Mark. On the other side were a few bodies with missing limbs, and ammunition boxes and empty shells lying here and there.

"Well, isn't this a relief," said Davidson. "Yeah, looks like they're dead. What's the next objective?" Asked Eric. "We need-" CLACK! Davidson (our squad leader) got shot in the head.

We retreated back to the other side of the tanks. Blood and brain matter stained both my clothing and Eric's. "Jesus, fuck, man! Anyone see where that came from?" Eric wiped his face.

Alpha leader spoke through the earpiece, "Sniper fire is coming from the building to our right, third floor, about 200 meters ahead. Shouldn't be too hard to get them."

As smoke filled the air, we ran from car to car, eventually having random bullets aimed towards us from the sniper. A bullet would land just a few feet ahead of us, but we'd continue forward.

Eric drew his shotgun and shattered the glass doors to the grey building in which we knew the sniper was in. All the while, you could hear the pop and clack of cover fire from Alpha Squad.

The stairwell was straight ahead. How convenient, I thought. With our weapons drawn, we lined up and began moving up the stairs, steadily.

We reached the second floor and continued moving up, until we heard the clack of metal against the marble floor...a grenade was coming down the stairs!

We began shuffling back. The grenade seemed to only have made it to the stairs above us, because when the explosion occurred we saw no blast, but we sure as hell felt it.

My eardrums burst with a flurry of pain, and the blast wave knocked the wind out of me as I hit the ground. Looking up through tears in my eyes, I saw that the same happened with everyone else.

Eric was first to his feet, rifle up and ready to go. John stood next and got behind him, as Mark helped me up. Without hesitation, Eric charged the next landing alone.

My ears were ringing and I felt as though someone had just drilled through them. We followed him to the third landing, next to the door we knew the enemy was behind.

Eric then pulled the pin to a stun grenade, opened the door to the third floor quickly tossing it in.

After a series of white flashes, and inaudible noises, we rushed through the door taking aim at anything even resembling the shape of a body.

My hearing had just started to come back when it was stifled by the bang of two gunshots. Mark had shot the sniper once in the leg, and again in the arm.

The sniper was slouched against a cubicle of the office room we were now in. He was obviously in pain, and I was going to put him out of it, until Eric used his hand to lower my gun's barrel.

Eric walked up to the sniper and got on one knee. "Why would you shoot at us instead of running away? You knew how stupid that was." "Because why retreat when I could kill more of you."

Eric's face contorted, then he rose to his feet and used the butt of his rifle to hit the sniper across the face. Blood spattered on the floor, leaving red on the white marble.

"Well was it worth it? Killing one more of us, just so you could be a hero to a bunch of savages that won't live to see the future?" Eric said.

He then grabbed his radio and spoke into it. "Target captured, execution after questioning." "Copied, we'll be moving forward," confirmed Lieutenant.

"Was it worth it?" Eric asked again, forcing the barrel of his gun into the bullet wound in the sniper's leg. A scream akin to that of an animal dying filled the air.

But what we were looking at now was less than an animal. It was just the shell of a human; the skin a dry husk.

"Just shoot me already...for fucks sake, put a bullet in my head!" The sniper's one good arm was reaching for his leg. "Oh, I will, but what's your name?" Asked Eric.

"Why in hell do you care?" "Just wondering." Eric smiled and put the barrel of his gun to It's head. "Any last words?"

"Yeah, I thi-" BANG. It's body made a slight jump and slid against the cubicle, eventually lying flat on the floor. A pool of blood now surrounded the head and stained the uniform.

"Idiot, that one. He actually thought I was going to let him finish." Eric looked back at us and chuckled. Both Mark and John stared at the body. I turned and headed for the stairs.

I got to the first floor and exited the building, not looking back. Although I considered the things we were killing less than human, it was always the blood and scream that made me feel empathy.

As soon as the squad came out of the building is when the firing started all over again. The gun fire seemed to have came from all directions: Eric went down first (taking bullets to the chest).

I got hit in the leg and instantly went down in a fit of pain and groans as bullets began to pound like sledgehammers against the body armor covering my back.

Each bullet struck with a magnitude that forced the air out of my lungs, causing me to wheeze and my vision to blacken from the pressure and pain.

Through blurry vision, I could just make out the bodies of Mark, John, and Eric. Eric was groaning and attempting to roll his body over. Mark and John were dead, they had both died instantly.

As all of our blood began to mix and pool together, I noticed my left arm and both legs were numb, yet I could feel the heat and crunch after every slight movement.

The hell that had been unleashed upon us had stopped. Nothing but the sound of wind as footsteps came into range. My heart wanted to be faster, but I could feel it beginning to slow down.

"Sorry this had to happen, but it's necessary," said a familiar voice. I barely had energy, but I turned my head to see who was standing over Eric.

It was Lieutenant. A revolver pointed at Eric's face as he spit blood towards our former leader. "Traitor...you're a damn traitor." Eric was already beginning to fade.

"Afraid so, but I can't just stand around while a monarchy is erected in place of our former government, which is exactly what we need to come back into power."

Lieutenant clicked back the hammer of the revolver. "I won't deny you your last words. Speak."

Eric coughed and grimaced. "That's funny, because just five minutes ago, I denied your friend up there final words. I blew his head off."

With a grin, Lieutenant pulled the trigger and the side of Eric's head flew off in a red mist. Then he saw me. He walked over.

Kneeling next to my head, he spoke. "What a shame, your squad could have been an asset to the cause, but instead you're reduced to another pile of bodies."

With another click, the hammer of the gun was pulled back. "How about you? Anything you wish to say?"

Groaning, I managed to smile and say, "Long live the Queen." As my hands became numb, I released the grenades then closed my eyes and held my breath.

Silence and blackness consumed me.

It's over for this soldier.