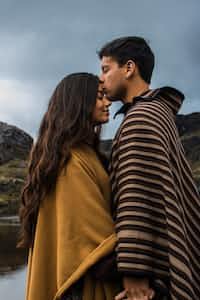 akdamn Sharing ma'h FEELINGZZ
Autoplay OFF   •   3 months ago
Transcript Use Images
This story is about a girl who was living simple and happy life but suddenly some sad incidents happened in her life that she lost everything but a person came in her life who protect her and love her more than his own self...
thriller part1part 1chapter 1chapter1thrillerchapter 1storynovel

Amelia, A 19 years old girl who was living a happy life in Chicago with her family and friends. She was a very polite girl land a little bit shy too.

Her father Liam was a secretary in a famous company in Chicago. Her mother Ava was just a housewife. Ava has an open mind and wants to live her life like a rich woman.

She wants to be rich, but what can she do? Liam was just a secretary.

One day, Liam's close friend died. Liam went to his friend's funeral. At the funeral, he went upset to see his friend's children and his wife.

When he finds out the cause of his death, he goes too weak and leaves. He thinks that he is responsible for the death of his friend all the way home.

After all, when his friend asks for help because he recently went jobless, he refuses with excuses because he was also not that financially good.

That's why his friend committed suicide because he could not support his family. At the same thought, Amelia's father was lost and fell from the front and collided with his car.

Time passed and mother and daughter were getting upset, But nothing was known about her Liam. The condition of Amelia and Ava would have deteriorated by crying.

A day passed and a report was lodged with the police but nothing was known that where he is. Three days later, at one o'clock in the night, a call disturbed Ava.

When Ava picked up the phone, she received the news that Liam had died in an accident. Ava started crying loudly which also caused Amelia to wake up.

Amelia became anxious and started asking her mother why she was crying. His mother lost her senses. she screamed and tell that her father is no more. Amelia started crying and started screaming.