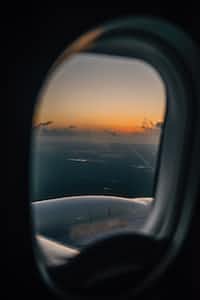 When we get to the back where first class is, I'm flooded with soft yet bright lights. It's wonderful. “Woah, it’s beautiful.” I say in awe. “Yeah. I was told that if we wanted anything we could just call.” Leo says, agreeing. I walk over to the sofa and sit down. We sit there awkwardly for a couple minutes before strapping into the seats,

“We are lifting off.” The announcer says. The plane tilts up and after what seems like only a few seconds later levels out. Leo shuts his eyes and tells me he’s going to try to sleep. After a while I fell asleep as well.

I open my eyes sleepily, as the lights turn on, and the flight attendant tells us we reached Kentucky, and will be taking off in another hour.

“Hey Ava can we grab some breakfast? I'm hungry, I bet there's something in the airport for us to snack on.” Leo says, and I notice he’s in the bathroom, the door partly agar, “What do you want?” I ask. “Hmm… Maybe just a burger and fry’s.

“I’ll have ‘Big Mac’ medium friends and a coke.” Leo says finishing our order to the Burger King cashier.” When we’re sitting down, enjoying our food I ask Leo, “What do you think you’ll enjoy most in New York?” He looks at me and thinks quickly, “I’m not 100 percent sure, but I guess it would be a nice change, and maybe try to find someone who wouldn’t break my heart and just walk off.”

I don’t think he’s really talking to me anymore, more of his demons. I’ll do that for you Leo, and more if I wasn’t so scared. I think to myself.

“Imma go take a nap, I'm tired.” I tell Leo, starting to lie down. “Okay, we have about an hour till the plane lands.” He says heading over to the chairs in the front. I settled down on one of the day beds that’d built into the wall. Not long after I close my eyes I fall asleep, and head into dreamland.