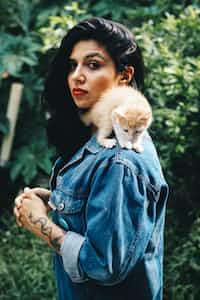 adityasen1 I am 14
Autoplay OFF   •   9 days ago
Transcript Use Images
A meeting with an old ghost.
fiction horrorhauntedghostcatsstory

We had recently shifted to a new house at Lucknow. It was an old bungalow secluded from the city in a thick forest.

A few huts were scattered across the landscape with farms arranged in a grid pattern. Lush green mountains surrounded us as we saw waterfalls meandering across the villages.

We arrived at our destination but I noticed the sky turn into a splotch of grey and blue. The bungalow was made up of fresh teak wood collected from the forest.

Our driver was in a hurry to leave from this place. On entering the house we were cordially greeted by the long wooden beams carved with beautiful sculptures.

It was truly a masterpiece and grabbed our eyes for a moment. I walked upstairs and found three rooms. I glanced through their interiors and chose the third one.

It had a cozy bed and a skylight bringing in the warmth of the sun. To my utter dismay the room smelled like cats.

In the afternoon we had arranged all our luggage and were ready to feast on some scrumptious dinner. The chandelier placed on the ceiling illuminated the house with joy.

We sat down on our chairs. Mother had cooked some soup and a salad with a few loaves of bread. We prayed for a moment to God for the fortune to eat a meal amongst poverty and hunger.

Suddenly the light of the chandelier started flickering and my father assured me that it must have been something to do with the circuits.

There was a power outage and a cold breeze passed through my hair from the open window. A chill went down my spine when I saw a shadow cast on the table of an animal.

It had two bright yellow eyes and stared at me. My legs were frozen with fear when the creature jumped from the window and snuggled my leg with it's thick fur.

Instantaneously the lights came back and I identified the creature as a cat.

The next day I spent my whole time visiting the outskirts and playing with the cat. It looked as if it was tamed. It must have belonged to someone.

So, I printed out some posters about a missing cat. I waited for the response but no one was at the door. We ate our dinner and slept. At midnight when it was 3 o'clock my cat fumbled.

It jumped from the bed and headed towards the door calling someone. I got up from my bed and walked through the dim light.

I could hear the insects chirping and see the bats hanging from the roof of the cottage. I took small steps avoiding the creaking of the wood.

I managed to enter the living room when I found out that the door was open and a shadow of a woman sat on the floor patting the cat. I wondered who it could be at such an absurd timing.

On strolling towards her I could see an old frail woman with glasses. She greeted me cordially and told me that the cat belonged to her. I was quite happy to find the cat's owner.

She asked me whether I would be willing to come to her house for a cup of coffee and a few toffees as a reward for my efforts.

I gave into her demands and followed her towards her house. I was astonished to see that her house was right beside our cottage and I hadn't even noticed it on our arrival.

Her house was made up of burnt bricks and hay. It was an unusual home. She conjured up some food from nowhere which she later on termed as magic.

I was sipping the hot coffee with pleasure when she started narrating a story about her relationship with our cottage.

She said that she used to work there as a servant for a few days and that the owner ceased to acknowledge her efforts and often scolded her.

She had left that place soon but on the very day she was arrested for the murder of her owner. She escaped from the prison with the help of an accomplice.

Since then, the police have been searching for her. After this story I was horrified and in a hurry to leave this place.

Unfortunately I wasn't able to do so as my body felt numb with the coffee I had just drank. I could hear her cynical laughter at the back of my head.

The next morning I woke up with a groan and found myself to be in the storeroom with a picture of the woman I had met yesterday.

I grabbed the painting and rushed towards my father asking who she was. He said grimly that she was the owner of this house who had been murdered. I gasped and my hands trembled.

The woman who I met yesterday was none other than a ghost famously known as the cat lady. Many tourists often complained about sightings of this woman and considered this cottage haunted.