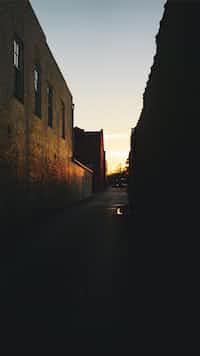 aaronramos Sci-Fi and Horror writer
Autoplay OFF   •   a month ago
Transcript Use Images
Chapter 2 Get Help
The friends find safety and assistance at a local gas station, …or do they?
thriller horrorthe towngoresuspencemysterygethelp funniest mystery stories

They felt lucky to find a gas station so quickly. The attendant was kind, got them a landline phone, and offered help with a first aid kit in the back.

He walked Ethan to the back of the shop while the others made the call.

Levi spoke to the police, he was always so calm in any situation. While driving here he caught up on the situation and explained everything to the operator in clear concise detail.

Feeling a little better about the situation an air of calm came across the group.

Levi paced just outside the door, trying to get a signal on his cell. All their cell phones had been useless since they reached the camp.

Jen stood by the door trying on sunglasses to make herself feel better. Nora was still in the car, nauseous because of the sight of blood.

The gas station mart was small but had all the conveniences one on the road would need. The shelves were well stocked with anti-freeze, condoms, and beef jerky.

Waiting by the counter Mark looked over the snacks. Mark had never tried a slim Jim.

The memories of "Macho Man" Randy Savage on TV snapping one in half to his trademark "Ooh Yeah!" allowed a brief moment of escape from current events and a half-smile overcame him.

But something caused him to shudder with chills all of a sudden.

He didn't know what it was at first, something so subtle it was his subconscious that heard it first, so now he listened.

There is was a dull, thump, pause, then again. It was slow but rhythmically steady.

Still, something was off about the sound. It wasn't a sound he had ever heard before, yet something felt wrong about it.

"How's it going Ethan boy?" He called out in a playful tone hoping to somehow ease his friend of the previous events drama.

No not silence, thumping was the only reply.

Mark looked to Jen and Levi who had just come back in.

Jen franticly waved her phone around cursing under her breath as she hunted for a signal now and met eyes with Mark who didn't look well.

"You guys doing all right back there?" Mark called out once again, this time shooting a stern look at Jen and Levi so that he wouldn't be alone in his sudden concern of the silence to his call.

No, not the silence, the thumping was of growing concern.

"You guys hear that?" he whispered.

"Listen!" Mark hissed to the two whose attention he now commanded, "Hey, Ethan, you patched up yet?"

Levi and Mark walked towards the end of the counter and tried to look down the small corridor that rounded the ice machine.

No response and there they could hear it clearly now, that strange sound.

"Ethan?" Mark called as they both proceeded to follow the short hall that turned the corner again.

The hall lead into a poorly lit stock room lined with shelves except for where it appeared that Tom and the clerk were, just on the other side of the last set of shelves.

"Ethan, how you holding up man?" Levi said as he walked towards his friend.

He froze, as did Mark when they saw the source of that thumping sound. Ethan sat in a chair facing away from them.

The only reason they could tell it was Ethan was that it couldn't have been anyone else.

The clerk raised an iron mallet again and came down well past where Ethan's face once was.

The two stumbled back, Mark grabbing his mouth fighting a gagging reflex.

Their presence caught the attention of the clerk who was fixated on the body and his task. The tall thin man froze, mallet mid-air, and turn slowly to face them.

His face, though covered in blood, was not one contorted by madness or twisted with hate, but the complete opposite.

How could it be that someone in the midst of such a horrid act could look so, normal?

The clerk sighed and cracked a smile, and then Tom's body suddenly convulsed and gurgled as the last few spurts of life left his body,

The sudden thrashing of the body put Mark in motion with only one thing in mind, run.

He quickly grabbed Levi by the back of his shirt collar pulled him as he turned to run.

While Levi was more in a fight than flight mode, he suddenly agreed with Mark and thought it better to get away and reevaluate the next plan of action.

"Get in the car now!" Mark screamed

"Jen, let's go!" Levi urged as he grabbed her arm and pulled her out the door.

"Ethan's fucking dead! The fucking clerk killed him! Where the fuck are the cops!"

Chapter 3 Others Thank you for reading See you next week