Commaful
The One Who Got Stuck on the Moon 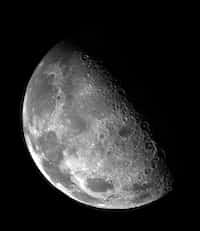 aakashtiwari A Storyteller
Autoplay OFF   •   a month ago
Transcript Use Images
A space shuttle consisting of seven individuals left for moon but only six returned.

The missing man now has a whole planet to explore by himself...till he can.
fiction sci-fiscifisatireweird

The One Who Got Stuck on the Moon

An operator at the NASA headquarters stationed at the ground centre for monitoring any communications from the outer space centre, was playing sudoku on one of the super computers.

This computer which could do a billion computations a second was currently losing a game of sudoku against an average IQ human which was quite a shame.

He saw the message arrived from one of their own sentient computer currently somehow active on the moon.

As per the instructions given to him, he had to immediately inform his superiors in case they receive any such communication.

He dialed the number and waited.

"What?" He heard a voice on the other end.

"Sir I...I just received a message from HAL 1212" The operator informed his boss while wiping a trickle of sweat from his forehead.

"This better be true otherwise you be on the next rocket to space!" And with that the boss slammed the receiver down without saying another word.

An hour later a big convoy arrived at the headquarters.

Not just the boss we heard on the phone just a while ago, but the bosses of all sizes and colour,

all the way to the top was now standing there at the ground centre looking at the front screen where a message was flashing.

"What are we waiting for? Go ahead and play the message" One of the important looking gentleman finally spoke once everyone got settled in their seats.

The operator had never felt a spotlight like this before on him. For a moment he forgot how this all works. Then somehow he managed to work it out and pressed play.

For a long time there was nothing but a blurred visual on the screen.

Then slowly they could figure out what seems like a man in the background. The man grew bigger and bigger and then finally he was the only thing covering the entire screen.

"Hey People! It's your friend Eddy live from the Moon" The man winked.

The man was tall in stature and a thick beard covered almost the rest of his face. He was wearing an orange jacket. At first glance you can say that he looked very much like a garbage man.

"What is he doing?" One of the scientists asked as they all stood there watching all this in awe.

Dr Polenski who was an expert in the study of human behaviour among other major honours under her name, was carefully observing all of this.

"I believe he is doing what the youth call nowadays as vlogging" she answered as she saw the man now explaining how the bathroom works inside the tent where he lives on the moon.

"There was an upload button on the panel to send the recording to us at the ground centre. This was used in case the astronauts wants to send any message across to their family."

"He must have misled himself in believing that this button uploads the video on Youtube." She finally concluded her explanation to which the other scientists nodded their head.

About couple of months ago, NASA launched a very ambitious project.

The project was branded as "Moon Walk". The plan was to select seven ordinary individuals at random with no scientific background and take them on a trip to the moon.

The trip was only for ten days and they just have to survive these ten days on the moon and then after that, the shuttle will bring them back to earth.

For these ten days, the scientists at the ground centre would continuously monitor all their activity so that they could gather all the necessary data to analyse their physical and mental activity and then guide them accordingly.

For ten consecutive days, the scientists at the ground centre worked tirelessly to make this project a successful one.

But, after ten days, when the space shuttle finally arrived back to earth among the big fanfare, they found out that although seven people left for the mission but only six of them returned.

"Tell me how is it possible that you missed a human being among only seven other human beings on the whole freaking planet?" Dr Shah was the head of this project and his head was now almost on the verge of exploding after hearing this.

They later found out that this man Edwardo Gonzalez thought it would be really funny to play a prank on all of them and so, he somehow deceived everyone and as a result,

he was now the only living being on the Moon.

What he didn't knew was that it takes almost a billion dollars for a single trip to the moon and so no organisation would now willingly invest in a rescue mission for only a single person.

"What are the chances of him surviving on the moon till our next trip?" Dr Shah asked as he saw the man now jumping on the surface of the Moon like he was on a trampoline.

"Very remote Sir" One of the scientists answered.

There was a long silence as the people looking at the video playing in the background tried to digest this truth.

"What should we do with the video Sir?" The operator finally asked.

"Upload it on that damn site like he wanted!" Dr Shah said while walking back to his cubicle.