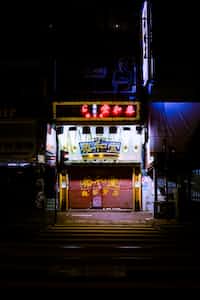 6tvi4mgbqogeoko Japanese illustrator with a disability
Autoplay OFF   •   24 days ago
Transcript Use Images
A Japanese person with a disability has sincerely translated the original work into English.
It is a comedy touch work. There is no grotesque depiction. Please read with rest assured . It's a collection of short stories, so you can easily read it.
A daily story of a young man who works desperately to prevent the store from going bankrupt in an extreme rural convenience store where only monsters come.
fiction originalanimalcomedycontemporary fantasycountrysidefantasyfictionfunnyghostjackofalltrades

Customer 1 Do not illegally occupy the toilet.

The busy hours of this shop are at night. Since many apparition races dislike light, customers rarely come in the daytime. Customers start coming when the sun is about to set.

In Japan, the time of sunset is called "tasogare". This is a remnant of the ancient Japanese word, meaning "who is he?". It is a perfect expression for customers with many mysteries.

Now, the first customer is coming today as well.

It was a girl who entered the store. She has a bob-headed hairstyle and wears a red suspender skirt.

Today's Japanese children don't look like this. It's a little old-fashioned atmosphere.

I felt incompatibility. In the first place, there should be no children in this depopulated area.

It's full of suspicion.

" Excuse me, Please lend me a toilet!" Said the girl.

I have a bad Premonition. However, it was difficult for me to refuse, so I decided to lend a toilet. That was the beginning of the nightmare.

Hmmm, it's too long. It's already been an hour since she went to the bathroom.

I am in trouble.

If she's sick or something, she may be lying inside.

Other customers are also in trouble.

There is only one toilet in this store.

But the biggest problem for me is that I can't use the toilet. After this, I have to run the store all night alone. The inability to use the toilet in this situation is nothing more than a tragedy.

I decided to talk to her from outside the bathroom.

This customer seems to have a strong commitment to how she is called by others.

To be honest, she's a hassle for me. Besides, it's kind of embarrassing to call people's names rhythmically.

"Yes! Do you have anything to do with me?"

At this rate, it takes a tremendous amount of time for a conversation to take place.

"I'm sorry to you, but it will bother other customers, so please come out."

Eventually, at sunrise, Hanako-san went out of the store. And I ran into the bathroom.

That evening, Hanako-san came again. "Please lend me a toilet! Until tomorrow dawn!" She declared Illegal occupation as if it were a matter of course!

"That line should I say! Why do you want to use the toilet all night?"

"Because the school toilet at night is pitch black and scary ..."

Hanako-san is an apparition who lives in a school in the neighborhood.

However, recently, the school has been abolished due to depopulation, and she seems to be in trouble because electricity does not come.

"What? Are you not good at dark places even though you are an apparition ?!"

"... I think you are very unsuitable for living in the bathroom."

Anyway, I don't want her to use the restroom in this store for a long time, so I'll ask her to buy a flashlight.

"Do you have the courage to stay in a store without money, even though you are not good at dark places?"

"Of course not possible!"

"Then, brother. Give me a flashlight for free!"

"Then, I'll pay the next time I get some pocket money!"

"I understand, huh ... I can't help it, so that's the payment method. ...The children in the apparition also have a pocket money system."

"Your costume is old-fashioned, so when I see you happy with the opening of electricity, I feel more like an old girl."

For the time being, a peaceful night will come. I thought so.

However, Hanako-san immediately called me to close the school at night. She seems to have forgotten to buy a flashlight battery.

I had no choice but to deliver the batteries to the abandoned night school.

I arrived at an abandoned school. It hasn't been a long time since it was abandoned, so the building is well preserved.

However, the school building at night has an overwhelming sense of intimidation and is eerie.

Enter from the half-opened entrance. Follow the wall along the pitch-black corridor. After a while, I found a creepy toilet in the deep, stagnant air area of the school building.

I opened the door because I didn't get a reply after a while. Then suddenly in front of me!

An eerie Hanako-san, illuminated by a flashlight, jumped out from below!

"If anyone is threatened by real apparition and is okay, I would love to see it!"

"I've been waiting all the time to surprise you!" "I want to be told that from my beloved girlfriend, though I've never had a girlfriend.,,,,,,Hmm? You have batteries!"

"I wanted to surprise you!"

"Because I'm an apparition!"

It's as complicated as a Buddhist Zen question!

"You don't bother calling me just to surprise me!" "Then, should I live in a convenience store toilet and surprise you? Oops!"

Hanako-san foror playful momentum and inadvertently dropped the flashlight and broke it.

Two screams echoed in the closed school, which was completely dark.

...Please give me a flashlight.

total amount due ￥500 total amount received ￥Next time, I will pay when I get some pocket money! balance due ￥500 As a result, a deficit of ￥500

Introducing the characters that appeared this time

One of the most famous apparition in Japan. It looks like a girl. They often settle in school toilets and are feared by children.

In order for us to call Hanako-san, we need to keep her promise. Promises vary from school to school. If you break your promise, Hanako-san will get angry, so be careful.